Sorry, I wanted to clarify that right up front, because I see this mistake made all the time. The word tanuki refers to the Japanese subspecies, not the entire species, which has a range quite a bit larger than just Japan.

You may be reading this thinking, “Koryos, I don’t know what a tanuki OR a raccoon dog is, can you please show me a picture.” 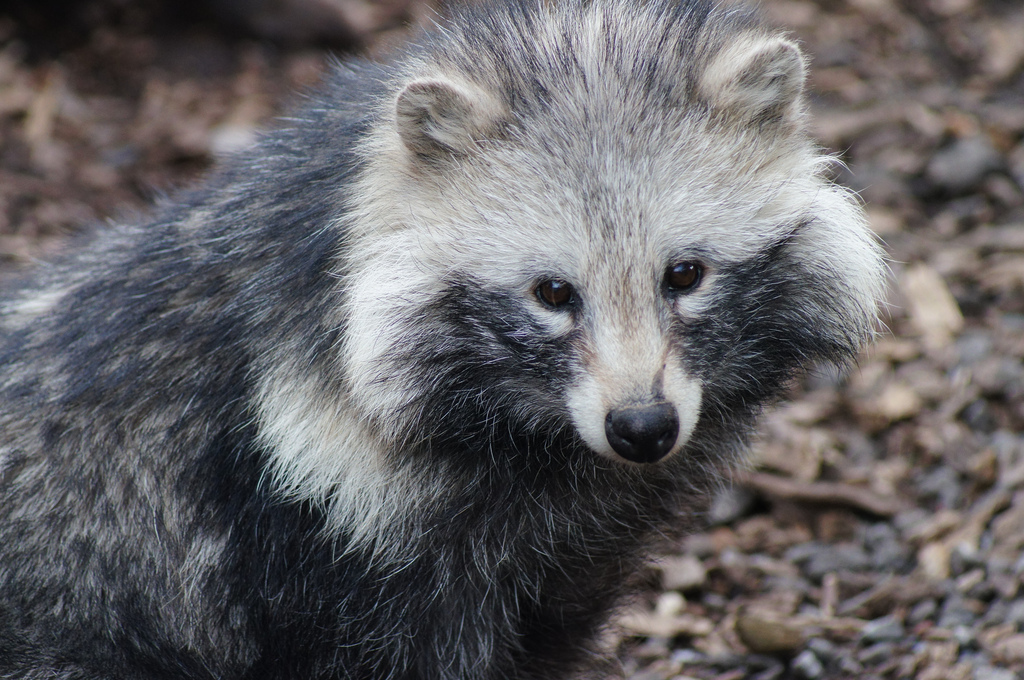 The raccoon dog, which goes by the scientific name Nyctereutes procyonoides, does look quite a bit like an American raccoon. But the two species are not at all related. 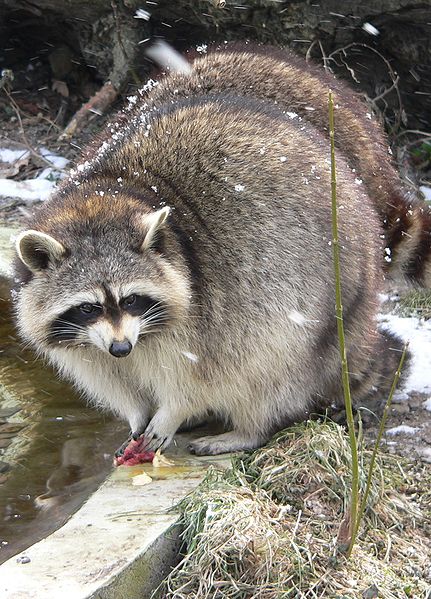 American raccoon. (Photo source.) I find that the quickest way to tell the difference between these guys and raccoon dogs is that raccoons have very prominent whiskers and slender paws, while raccoon dogs have small whiskers and lil’ dog paws. Also, raccoon dogs don’t have ringed tails.

Like the name suggests, the raccoon dog is a member of the canid family. With its short limbs and small, rounded ears it actually resembles members of the South American canid group, but it is actually most closely related to the true foxes in the genus Vulpes. 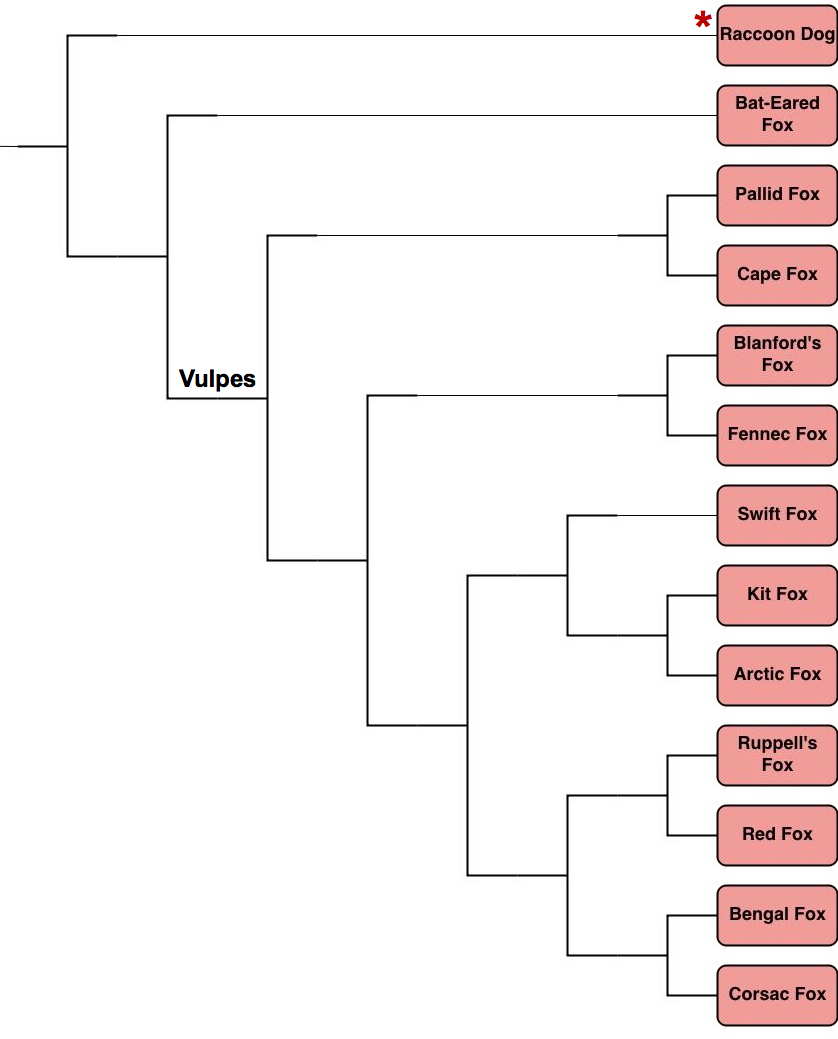 The raccoon dog is the sole survivor of its own genus, Nyctereutes, that diverged from other canids between 7-10 million years ago. Few fossil remains have ever been found of other members of this group, so perhaps it never went through much variation: the squat, aggressively omnivorous little thing might be more or less in perfect shape. It’s certainly succeeded well as an invasive species in Eastern Europe, far from its ancestral home in East Asia.

The range of the raccoon dog. Blue is ancestral range, red is introduced. Europeans originally imported raccoon dogs for their luxuriant fur.

Here’s what extensive studies have shown us: the raccoon dog’s major activities are a) eating, b) pooping, and c) sleeping. I’m kind of kidding but kind of not. These are the areas people tend to study with the raccoon dog. For good reason- all three of them are, if not outright unusual, at least rather interesting.

The sleeping thing is the big one. The raccoon dog is actually the only member of Canidae known to hibernate. (Ok, hibernating isn’t actually sleeping. Animals actually have to stop hibernating in order to sleep- isn’t that weird?) 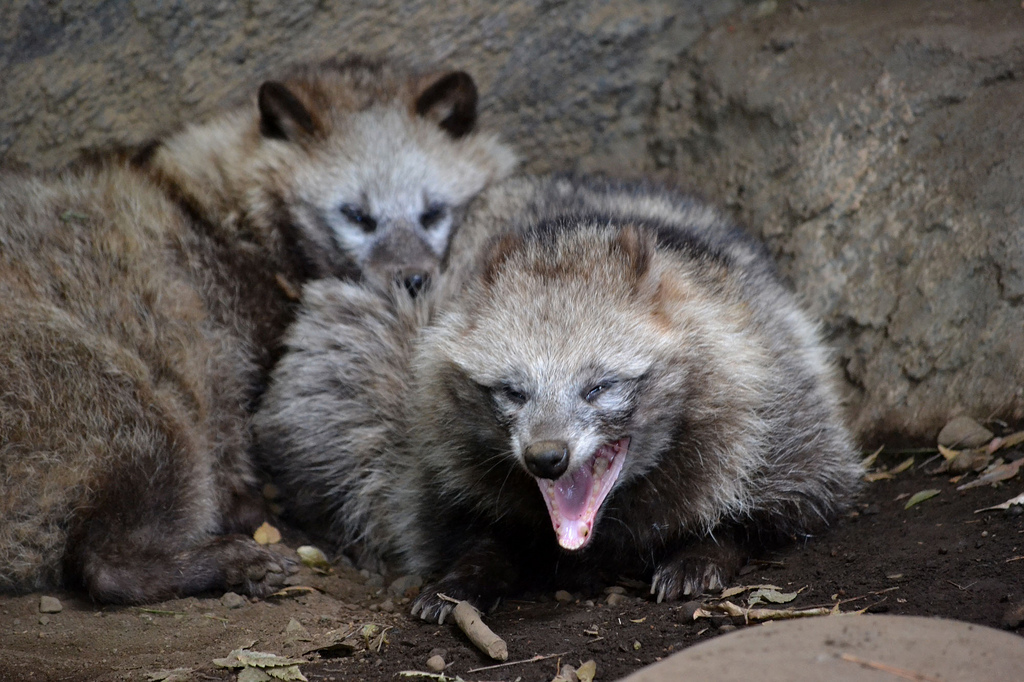 This raccoon dog achievement is often touted on the species fact sheets, but it’s important to note that most raccoon dogs don’t actually do a great deal of hibernating in the strictest sense of the word. They do put a lot of effort into fattening themselves up during the autumn months and go into a state of torpor in the winter, but since they can be wakened relatively easily and may even be active during warm winters, it isn’t technically true hibernation. Some subspecies that live in warmer climates, such as the tanuki, never go into winter torpor at all.

Most raccoon dogs, however, do spend a significant amount of time bulking themselves up to the point of protracted waddling. From their svelte summer state (at about ten pounds) they can double or nearly triple their weight in preparation for the Big Nap. 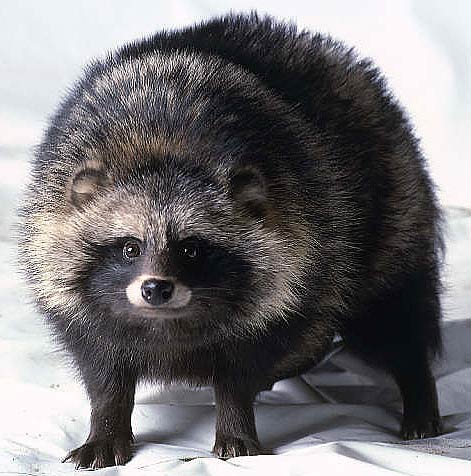 So, whence does this bulk come? Why, from the raccoon dog’s incredibly variable diet. Being a creature normally found around streams and forests, the raccoon dog eats… nearly anything. Seriously. Do they eat a lot of small rodents? Yes. Do they also eat frogs, lizards, earthworms, eggs, insects, fish, and small crustaceans? Yes. Do they also eat wild plants, fruits, and berries as well as agricultural products such as oats, corn, watermelon, tangerines, pears, and loquats? Yes.

I didn’t even know what a loquat was prior to writing this. (Picture source.)

Yet more items on the raccoon dog menu include: carrion and poop. When I said they’d eat anything, I did mean anything.

Speaking of poop: raccoon dogs can identify individuals by their poop! Well, the smell of their poop. Rather unusually among canids, raccoon dogs poop in communal “latrines.” They appear to notice when a stranger poops into their latrine, and know the difference between their own poops and the poops of their friends. Nobody knows exactly what sort of information they derive from the eau de poo, but good guesses include things such as the health and reproductive status of another individual.

Raccoon dogs are not particularly territorial. There isn’t any real reason for them to be, considering their diets: most items are small, scattered widely, and can be found based on opportunity, making them pointless to try to defend. They have general home ranges but no defined boundaries, though neighbors do tend to avoid each other. Family members that have dispersed are sometimes seen resting together and using the same latrines.

Like nearly all canids, raccoon dogs are strictly monogamous, and they generally stick with their pair until one partner dies. These pairs share the same territory, sleep in the same den, and often forage together. Some same-sexed pairs have been observed living together.

So: puppies. Raccoon dogs have fairly large litters, averaging around nine puppies. Infant mortality is high because, as one author put it, raccoon dog pups are “short-legged and clumsy.” Basically fat little poufs rolling around in the forest, begging to be eaten. 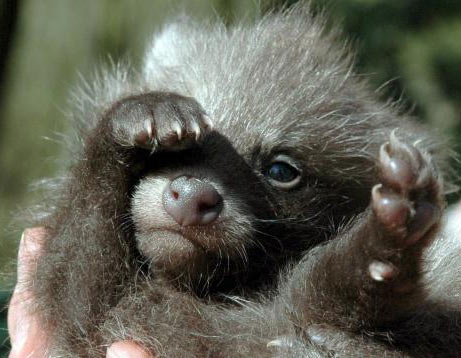 Damn it. GOD damn it.

Mom and dad have a time of it watching over these little waddlers. Because most of their food items are so tiny, neither parent generally finds it worthwhile to bring things back to the den. Instead, the raccoon dog employs one of the longest nursing periods among Canidae: five weeks.

This long nursing period means that more stress is placed on mom to keep producing this. Because of this, mom has to spend more time foraging than dad does. But no worries there- raccoon dog dads are the best dads, and spend considerably more time with the puppies than the moms do. The pups are almost never left unattended before they’re weaned, and mom and dad trade off shifts so that one can forage while the other guards the pups.

Once the pups are weaned, they begin following their parents out on foraging expeditions like little waddle-trains. Pups stay with their parents for about a year before splitting off and looking for their own mates. Family reunions occasionally occur and involve celebratory pooping in the latrine.

Not terribly much is known about raccoon dog social behavior in the wild. They do have several similarities with a close relative (well, relatively close, given that it’s the other species basal to Vulpes), the bat-eared fox, the most prominent being that they hang their tails in an arch during periods of excitement or arousal. Bat-eared foxes also exhibit high levels of paternal care.

Raccoon dogs do not bark; in fact, they sound more like cats than dogs at times. Aside from catlike mewls, they are known to yelp, whine, and growl. Raccoon dogs are also among the few canids that have a habit of climbing trees. Others include the gray fox and the New Guinea singing dog.

I mentioned that the tanuki was a subspecies of the raccoon dog before, but it is not the only one. There are actually five subspecies of raccoon dog: N. p. procyonides (nominate), N. p. koreensis (Korean), N. p. ussuriensis (Russian), N. p. orestes (Chinese), and N. p. viverrinus (Japanese). 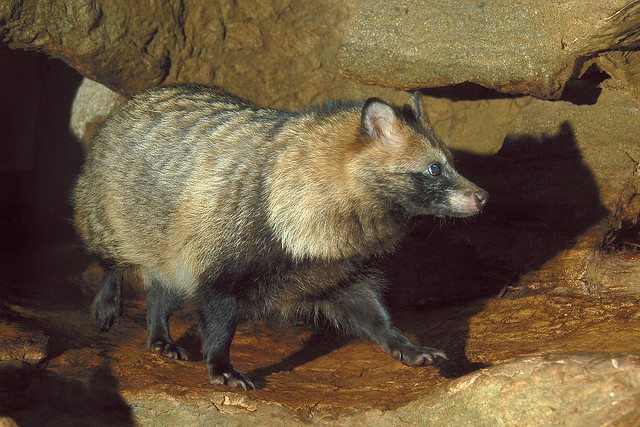 N. p. viverrinus is what is locally known as the tanuki, and it is a rather interesting subspecies largely because some scientists think that it should be its own species. It is quite different from the others, probably because it has been isolated so long on the island of Japan: it is overall smaller, skinnier, bears thinner fur, doesn’t hibernate, and has much smaller litters than the mainland subspecies. Beyond that, it actually has a different number of chromosomes than all the others. The mainland subspecies have 54, while the tanuki has 38.

Probably good enough to consider them separate species, at least in my book, but the IUCN said no to the proposed split in 2001. The IUCN is the boss.

I can’t reasonably mention the tanuki without of course referring to its cultural significance in Japanese folklore as a shapeshifting tricksters. With giant balls.

I always like to end an article on a good pair of balls.

Tanuki on the Prowl

More tanuki on the prowl

Some young tanuki showing arched back and tail behavior when confronted with a cat.

Read on: Learn more about the Canidae family in my Introduction to Canidae post. More canine articles coming soon!

Sasaki, H., & Kawabata, M. (1994). Food habits of the raccoon dog Nyctereutes procyonoides viverrinus in a mountainous area of Japan. Journal of the Mammalogical Society of Japan, 19(1), 1-8.

Yamamoto, I. (1984). Latrine utilization and feces recognition in the raccoon dog, Nyctereutes procyonoides. Journal of Ethology, 2(1), 47-54.

Writer, ethology enthusiast, axolotl herder. Might possibly just be a Lasiurus cinereus that types with its thumbs.
View all posts by Koryos →
Tagged  canidae, raccoon dog.
Bookmark the permalink.