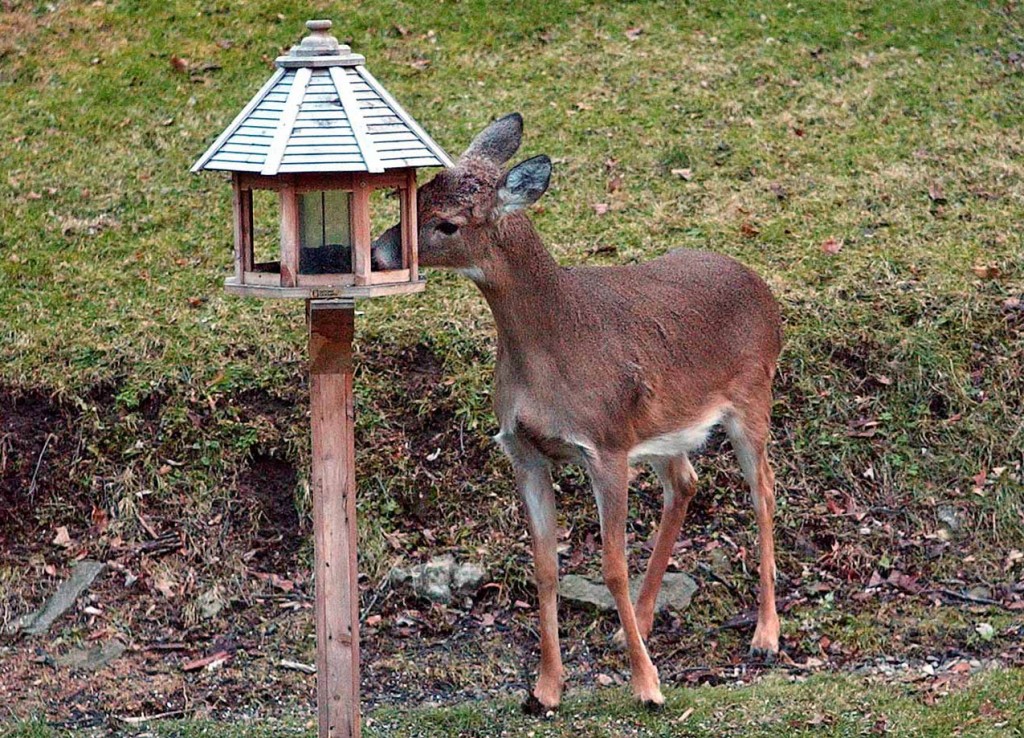 If you live in the suburbs of the Northeastern US like I do, on any given day you might be able to look out your window and see a herd of deer like the one pictured above. In my neighborhood in particular, I am surprised if a day goes by where I don’t see any.

The shift in the white-tailed deer population can be attributed to many factors. In the 1920s the species was actually nearing extinction due to overhunting before government protection programs and national parks sought to save it. You could say that they succeeded. Unfortunately, a number of factors are now leading the deer population to spiral out of control. These include:

So there are a lot of deer and the population is still growing. The impacts this has are not just the annoying ones that I see every day (deer poop everywhere, deer carcasses all over the roads, destroyed gardens, and the occasional deer attack).

Deer in the US eat 15 million tons of vegetation each year, which costs about $248 million in damage to crops and landscaping in the Northeast alone. About 150 people per year are actually killed due to car collisions with deer. Furthermore, deer carry deer ticks, which can transmit lyme disease to humans.

But the impacts are not limited to us. Native ecosystems are bearing the brunt of the damage. A study on one forest in Pennsylvania found that over half of all plant species diversity had vanished thanks to hungry deer. Other studies suggest that deer prefer eating native to exotic plant species, which facilitates the spread of invasive plants.

This can lead to a cascade of effects on other animal species. Nesting bird populations drop due to the loss of certain tree species (the deer like to eat the new saplings). Insect species, particularly caterpillars, may lose their food sources. Conversely, biting flies and other parasites that prey on deer will increase.

What we should do about the deer overpopulation has been a highly divisive issue in the US; specifically between those who favor lethal vs. nonlethal methods. There is limited success with methods such as fertility control, but these successes are mostly found in closed populations (i.e., fenced in or isolated) and take a long time to take effect.

Lethal methods also have their pros and cons. The possibility of reintroducing wild predators of deer in parts of the US where they are now extinct is often raised and just as often vetoed, given that the bulk of the deer population lies smack dab in the middle of the suburbs.

Similar concerns are raised when people bring up hunting; furthermore, hunters must be advised to take does rather than trophy bucks or they will not significantly affect the population. Studies have shown that controlled hunting programs are effective over small areas, but the effects are mixed over larger ones.

While people argue over what the best way to manage deer is, the population continues to grow and grow, leading to an increase of diseases (such as epizootic hemorrhage disease, which can also spread to livestock) and starvation.

With deer populations going well over carrying capacity in many areas, the risk of population crashes grows. While a crash- which dramatically decreases the number of animals- sounds like it might be a good thing in this case, crashes can be catastrophic. In one famous reindeer crash on St. Matthew island, 95% of individuals died in a single winter.

That, however, is the worst-case scenario, and since few deer populations are so constrained, the more likely one is that deer populations will eventually strike a kind of limbo- not increasing very much but still heavily overpopulated, and constantly on the brink of starvation.

In this case, what is the correct thing to do? The longer we wait, the more damage is done, not just to people, but to the local ecosystem as well. But methods like contraception take several years to really show positive effects, while hunting has to be carefully managed in order to be effective. And this isn’t even bringing in the “moral” aspect of hunting versus nonlethal methods. Yet either way, many, many deer are going to die, and the only way to improve their- and our- quality of life is to dramatically reduce their population.

This isn’t the first time I’ve written about the issues with animal overpopulation- check out my post on rodent plagues. I’ve also written an article about deer with fangs.

To see a list of all animal articles that I’ve written, head to the Nonfiction section of this site.

Insurance Institute for Highway Safety. 2009. Deer-vehicle collisions: no easy solutions but some methods work or show promise. Advisory No. 31.

Writer, ethology enthusiast, axolotl herder. Might possibly just be a Lasiurus cinereus that types with its thumbs.
View all posts by Koryos →
Tagged  ecology, ethics, population dynamics.
Bookmark the permalink.