What’s the Function of the Prostate?

The prostate is a gland nestled snugly between the bladder and rectum, and below the seminal vesicle. The urethra passes through it on the way to the penis. 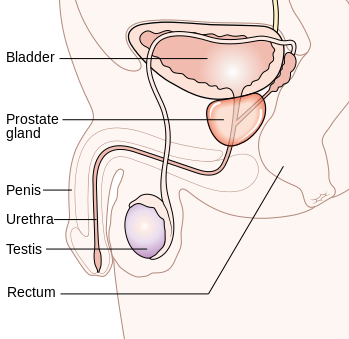 Glands, as most of us know, are organs that make and secrete chemicals such as hormones or proteins. Sweat glands, for example, secrete sweat on the skin, and the thyroid gland secretes thyroxine into the bloodstream. So the prostate, too, manufactures and secretes a substance- prostatic fluid, a component of semen. Semen does not just consist of sperm!

Y’see, there is a problem when it comes to sperm- and that is the dangerous trek up the vaginal canal. As vagina owners tend to know, that shit is acidic- with an average pH of 3.5-4.5. (Neutral substances have a pH of 7.) The vaginal tract does this to protect itself from infection by bacteria, as most of the nasties thrive at neutral. Ironically, it’s beneficial bacteria living up there that help keep the vagina acidic, which is why vagina owners taking antibiotics are more likely to get yeast infections.

But anyway, back to sperm. If the lil wrigglers went into the vagina without protection, they’d be obliterated by the acidic environment. So fluid secreted by the prostate gland to make semen slightly alkaline so it can combat the vagina’s acidity and prolong the lifespan of the poor sperm.

(Yes, if you were wondering, that is what gives semen its slightly bitter taste.)

That’s the main function of prostatic fluid, though it does other stuff too: sugars in it help nourish sperm cells, and it both lubricates the urethra and thins out seminal fluid so the sperm don’t get gunked up or stuck together. In some mammal species, it also helps secrete the components of the mating plug… which, if you hadn’t heard of it, is sort of like a wad of biological glue that a penis-owning mammal might deposit at the opening of another’s vagina post-intercourse. It functions as a way to reduce competition and a means to keep sperm from falling back out. 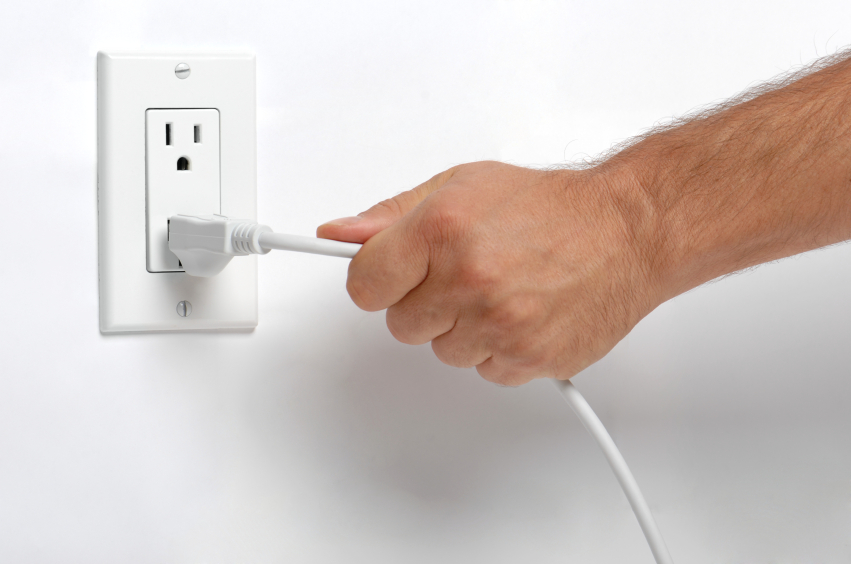 I almost put an image of a real mating plug here, but then I decided I didn’t hate you guys enough. We’ll have a post on all the awful things that go up the vaginas of woodland critters later.

So THAT is the function of the prostate gland, and you must agree that it is a pretty crucial function- without it, we’d be much less successful at reproducing. But other vertebrates don’t have prostate glands (or as a matter of fact, other specialized reproductive glands such as seminal vesicles or Cowper’s glands). So why did prostate glands turn up in mammals- and why did some mammals lose them again?

Yup- some mammals don’t have prostates. These include badgers, otters, martens, and… sloths. For some reason, the sloths don’t surprise me, but I digress. Otherwise, though, they’re ubiquitous among mammals. Even monotremes like the platypus have very basic prostates- in fact, arguably, the presence of a prostate gland, like the mammary gland, is an essential mammalian feature. The two glands even seem to have evolved at the same time.

You might wonder, as I do, if this means that the vaginas of mammal species sans prostate are less acidic. The answer is… I don’t know! Perhaps badgers are averse to having their vaginal pH tested, as I couldn’t find any information. 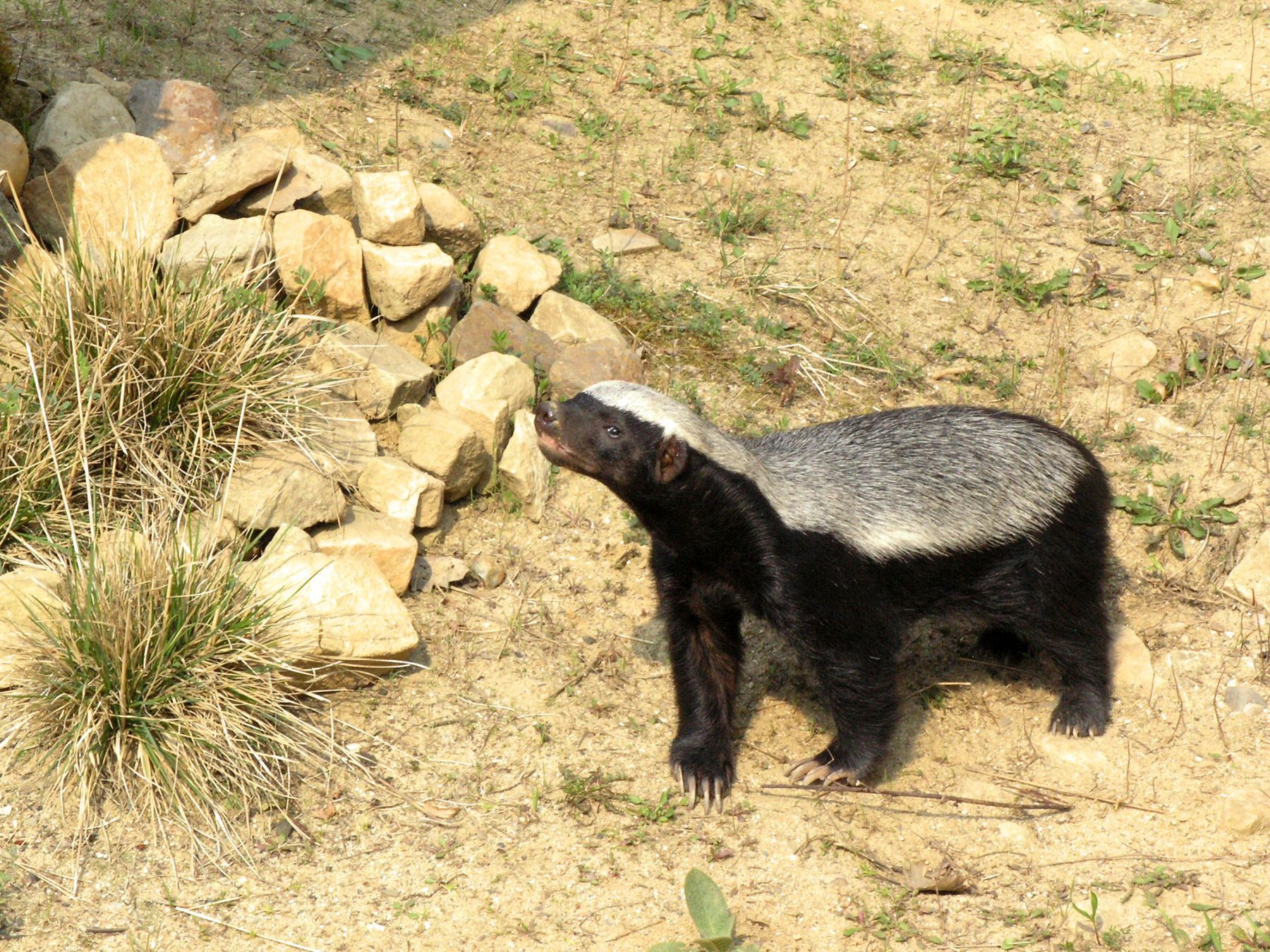 I mean… are YOU going to ask her? (Photo source.)

However, it is important to point out that not all mammal species with prostates actually have acidic vaginas. The fact that most research has focused on human and other primate reproductive systems has left us with a very primate-biased view of the stuff- it was only found out as recently as 2013 that cow and sheep vaginas actually have near-neutral pH. So it is possible that primate prostates are actually more unusual among mammals for the role they play in combating vaginal acidity.

Indeed, most literature on rodents emphasizes the role of the prostate in the production of the mating plug, not in making sperm more alkaline. Conversely, canines, which rely on copulatory ties rather than mating plugs, produce huge amounts of prostatic fluid to mix with their urine during scent-marking. Mammal species with more sperm competition tend to have heavier prostates, so they likely play a large role in virility, and probably have many other functions we simply aren’t aware of. There is not enough prostate research out there to say for sure.

This sloth has no prostate. Why? Because sloth, apparently.

Ok, so in any case, I am sure many of you are wondering why I haven’t touched that other thing the prostate does… the whole, erm, stimulation bit of it. For many prostate owners this is a rather significant aspect of the gland; indeed, some can ejaculate from prostate stimulation alone. Why does the lil gland play such a role in sexual pleasure?

The answer to this mostly has to do with the placement of the prostate. The vas deferens, the duct that transports semen from the testes to the urethra, joins the urethra within the prostate itself. This area of joining is referred to as the ejaculatory duct. Importantly, this area is surrounded by the muscles that push semen out of the urethra during ejaculation, as well as many of the nerves that contribute to the sensitivity of the penis. Essentially, the prostate is the last stronghold for the semen before ejaculation occurs- in fact, the word “prostate” even means guardian.

You can imagine that having those nerves, muscles, and ducts contained in and surrounding the prostate stimulated during times of sexual arousal can make the whole process more intense; indeed, those who enjoy prostate massage report having “harder” and “deeper” orgasms with both penile and prostate stimulation.

These probes are specially designed to go up the butts of bulls, cats, and ferrets, respectively. As a side note, apparently successfully using these things requires “skill” and “finesse.” (Source.)

The prostate plays such a large role in the human orgasm that people who have had a prostatectomy are usually unable to maintain an erection, and will be unable to ejaculate even if they do reach orgasm (this is called a ‘dry orgasm’). Conversely, when mice had their prostates removed, they were still able to release semen quite efficiently due to the different anatomy of their prostates, which don’t completely encircle the urethra.

I would be remiss if I did not mention the fact that penis-owners are not the only ones with prostates, or at least prostate-like organs. Those with vaginas have a prostate analogue known as Skene’s gland, which is part of the fabled G-spot. The size of this gland varies wildly between individuals, but in those who experience vaginal ejaculation, it contributes certain proteins and chemicals to the fluid just as in penile ejaculation.

All right, so that’s a pretty long summary of what the prostate does and how it does it. As for the last part of the question from dancing-thru-clouds about why the prostate is frequently afflicted by cancer, the answer is simple. Areas of the body where cells divide more frequently are more likely to get cancer because it increases the chances of cancer-causing errors happening during gene transcription. Glands like the prostate are very busy division-wise, increasing their risk.

More interesting is the tendency of humans to get benign prostatic hyperplasia, an enlargment of the prostate that constricts the urethra. This leads to painful and difficult urination. The interesting bit isn’t that, but rather the fact that the growth of the prostate is considered fairly normal throughout a fellow’s lifetime- it’s only after about age 50 that it can become a problem. Presumably, this is because our ancestors frequently never lived that long.

So: that’s the lowdown on the prostate. Not so useless after all!

Writer, ethology enthusiast, axolotl herder. Might possibly just be a Lasiurus cinereus that types with its thumbs.
View all posts by Koryos →
Tagged  anatomy, evolution, sexual behavior.
Bookmark the permalink.