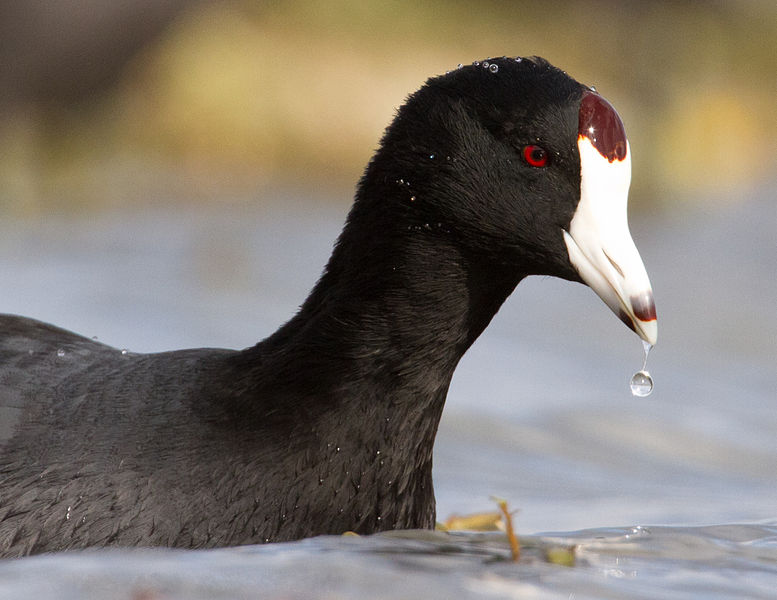 You may have noticed that the adult bird is the most singularly evil looking creature you could possibly imagine, compared to the babies, which are just kind of balding and vaguely ugly. The adults? They have been through some shit. It changed them. Warped them, even.

It doesn’t start out so bad. Like many bird species, coots are seasonally monogamous and mama and papa will raise the kids (generally an average of about 6-9) together. The parents encourage the babies to start swimming and feed them, as you can see in this peaceful video.

Three or four days after the chicks hatch, however, things start to change.

The parent coots will begin attacking one of their own chicks by vigorously shaking its head and neck. They begin these attacks on each chick at first, but they eventually settle their focus onto one or more in particular. Often, the persecuted chick stops begging for food from its parents, where it then… starves to death.

Like I said, coots start out with 6-9 chicks, but end up with about two or three.

If you’d like to hear the dulcet tones of David Attenborough narrating this phenomenon, you can watch this segment of the Life of Birds.

Now, at this point you’re going, “What the fuck, Koryos! Why are coots such fuckin assholes?” And you’d be right- outright killing your children is rather unusual, even among birds that lay more eggs than they take care of. (Usually they sit back and allow the siblings to kill each other over scraps of food, which is nice of them.)

The crux of the matter seems to be that they simply can’t feed everyone in the brood. They can’t find enough food to feed all nine most years.You ask, “Well, why do they even LAY nine eggs if they can’t feed them???” And I respond, “Look, shit happens, sometimes an egg gets eaten by an oviraptor or stepped on and sometimes it’s actually a really good year and they can afford to buy all the nappies they need and no one needs to die! So why not lay nine eggs just in case?”

(You nod knowingly at this very logical assessment.)

So is it, like my buddy David suggested, because the parents are “choosing the strongest chicks?” The chicks that’ll be the most likely to survive to adulthood and make more chicks?

It seems pretty logical, but- and I hate to contradict David- it’s probably wrong. That theory is based on research that came out in 1984, and there’s been a lot more since then.

For example, research on moorhens, which, as you’ll recall, are a close relative of the coot, found that they had some of the same behavior. Except the chicks they attacked weren’t the weakest of the brood, but the largest. Again and again, they drove them away, allowing the weaker chicks to get more food. To these researchers, it seemed like the opposite was happening: rather than favoring the strongest, the moorhens seemed to be actively discouraging sibling competition among their brood. And um, if the larger chick happened to get driven off to the point where it starved to death, uh… I think the phrase is “killing with kindness.”

So was that the secret of the coot chick gauntlet? Mom and dad were just trying to keep the peace?

I don’t know about you, but six out of nine chicks killed ‘accidentally’ while ‘trying to stop the kids from fighting’ is a mite suspicious to me. It seems like, pardon the expression, overkill.

Ok, so what the hell is actually going on with coots, then?

Well, as it turns out, coots have a dirty little secret. They are occasional brood parasites.

You ever heard of what the cuckoo does with its eggs? It lays them in the nests of other birds, whereupon the baby hatches first, murders its adoptive siblings, and tricks the parent bird into feeding it as it swells like an engorged tick.

The coots do this too, except they do it to members of their own species. When a mama coot gets sperm in her snoot but has no territory to make a nest on, she gets crafty- she sneaks into the nests of other coots and quietly deposits a few eggs. It’s actually a pretty sweet deal because then she doesn’t even have to take care of them, she can float off and let the hapless nest-owner do the work. In fact, some nest-owning coots still become brood parasites part of the time.

Now I think you have an idea of where this is going by now. Why would coot parents suddenly decide to kill off over half their brood? Could it be because they aren’t chumps and they don’t want to raise some other fucker’s kids??

There was a study done on coots to examine how they tell the difference between their chicks and the sneak’s chicks. Turns out they don’t really know, they just base it all on whatever the chicks that hatch earliest look like. Which makes sense- a smart brood parasite is not going to lay eggs in an empty nest, as even the dumbest coot might find that a little strange to come back to. So the first-hatchers are probably the coot’s actual children, and since there’s a good deal of variation between the looks of the chicks of different coots.

The scientists even found that if they swapped out the eggs so that the parasitic kids hatched first, the coots would turn on their own children. You scientific bastards!!

So um, what’s the lesson we can take from all this? Birds are fucking complicated? Yeah, that’s probably close to it.