Stuck on what costume to wear for this Halloween? Perhaps you should look to nature for some suggestions! Here are a few classics:

Truly, this is the best time of the year.

In the spirit of the season I thought I’d write a bit about animals that like to make costumes for themselves. In a strictly scientific sense, this is called “decorating behavior” and spans from full-body coverings to the most tastefully sparse jewelry. As for why animals decorate, the reasons vary. For example, the juveniles of one species are known to use it to signal the adults to give them sugar-rich substances. (I am referring, of course, to Trick-or-Treating.)

Before we delve deeper into what causes decorating behavior, though, let’s first make sure we understand what decorating behavior isn’t. With the exception of feces, excretions that come from the animal itself aren’t considered decorative. For example, when you brush your hair, it draws oil secretions from your scalp down the follicles- but you wouldn’t think of that as putting something in your hair, would you? Many animals ooze stuff that they rub on their bodies, but for it to count as decoration it must come from the external environment. Feces are an exception because they pretty much become part of the environment as soon as they make their way out of the body.

So, the first part of our decoration definition states that decorations must be something picked up from the environment. But not everything an animal picks up is a decoration. Food items aren’t, obviously. And neither are tools. For something to be considered decoration, an animal must place it on its body and retain it there. No eating, no lock-picking or anything like that. Nuts in a hamster’s cheek pouches do not count as decorations.

Have a good idea of what we’re talking about now? Ok, so let’s look at the many reasons why animals decorate themselves. The most popular and well-studied one is one you’ve already thought of- defense.

But defense against what? Your mind likely immediately jumps to ‘predators,’ but predators are honestly only one of many, many ways to die. I mean, humans don’t have predators, yet roughly 500,000 people managed to do themselves in by tripping over furniture in 2013. The environment is truly deadly.

Sea urchins cannot trip, given that they have no legs, but they do suffer environmental damage when currents smack them around and tangle seaweed up in their poky bits. Many urchins will cover themselves in little rocks in order to shield themselves from these hazards, which is amazing because I bet you never considered the fact that an animal composed nearly entirely of sharp points would need more defense. 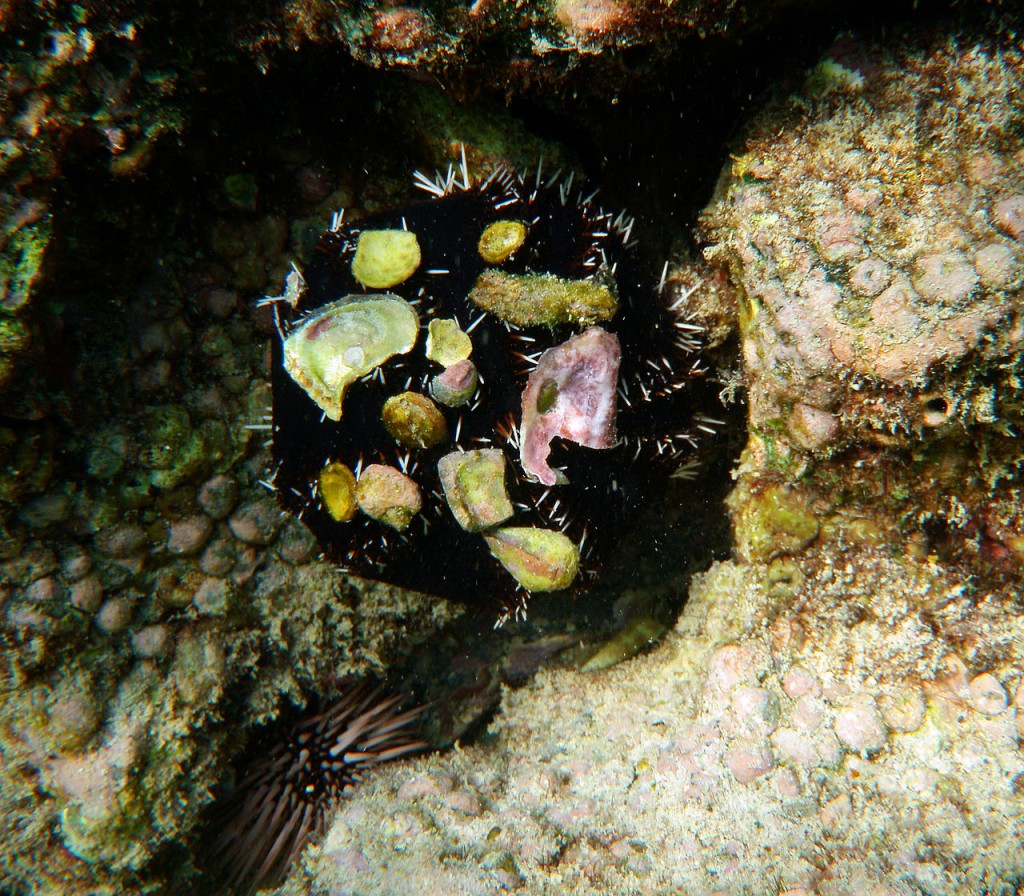 This sea urchin has made a charming outfit out of seashells. (Photo by Brocken Inaglory. CC by SA 3.0)

The rocks also act like a very thick layer of sunscreen, protecting the urchin from UV damage. Keep that in mind as a feasible alternative the next time you forget your Coppertone at the beach.

The poop umbrella also shields against weather hazards, and some species actually swing it around to deter predators. Amazing. (Photo by Manfred Kunz. CC BY-SA 3.0)

Now that you’ve digested that bit of information, let’s go into costumes that are strictly antipredator.

The most famous decorating animal is probably the aptly-named decorator crab. Though calling it the decorator crab is a bit of a misnomer, as many species of crab within the superfamily Majoidea (the spider crabs and relatives) decorate themselves, and the trait is not monophyletic. Apparently, the behavior was profitable enough to have evolved separately in multiple lineages. In any case, watching them decorate themselves is fascinating and adorable.

Without decorations, there is nothing particularly remarkable about the looks of a decorator crab species, aside from their being somewhat…. fuzzy. Like all crabs, their bodies are covered by a hard carapace (exoskeleton), but on this carapace they have millions of tiny, hooked setae that act like velcro. 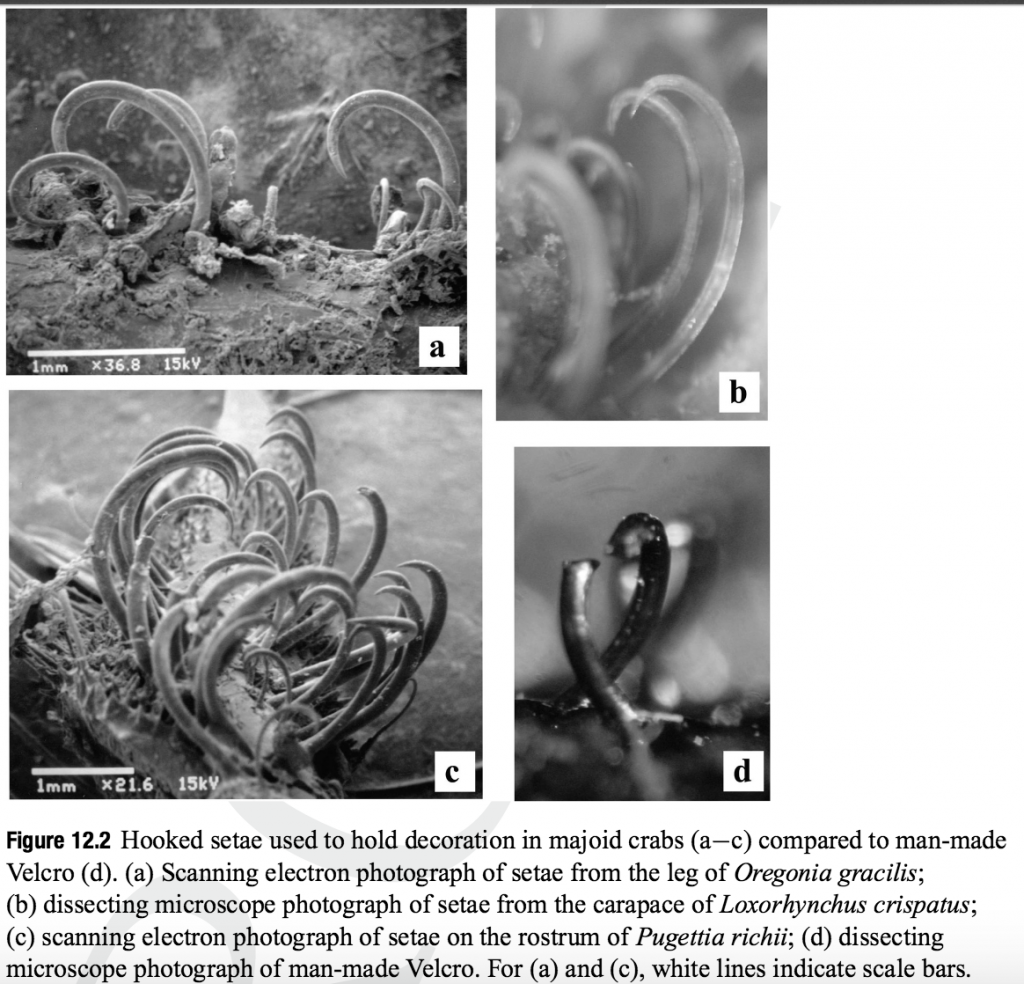 But it is highly unlikely that you will ever see a decorator crab that isn’t costumed. To them, nudity is more than embarrassing, it’s deadly. Multiple studies that all involved disrobing a poor crab have confirmed that they are much more likely to get picked off if in the buff. 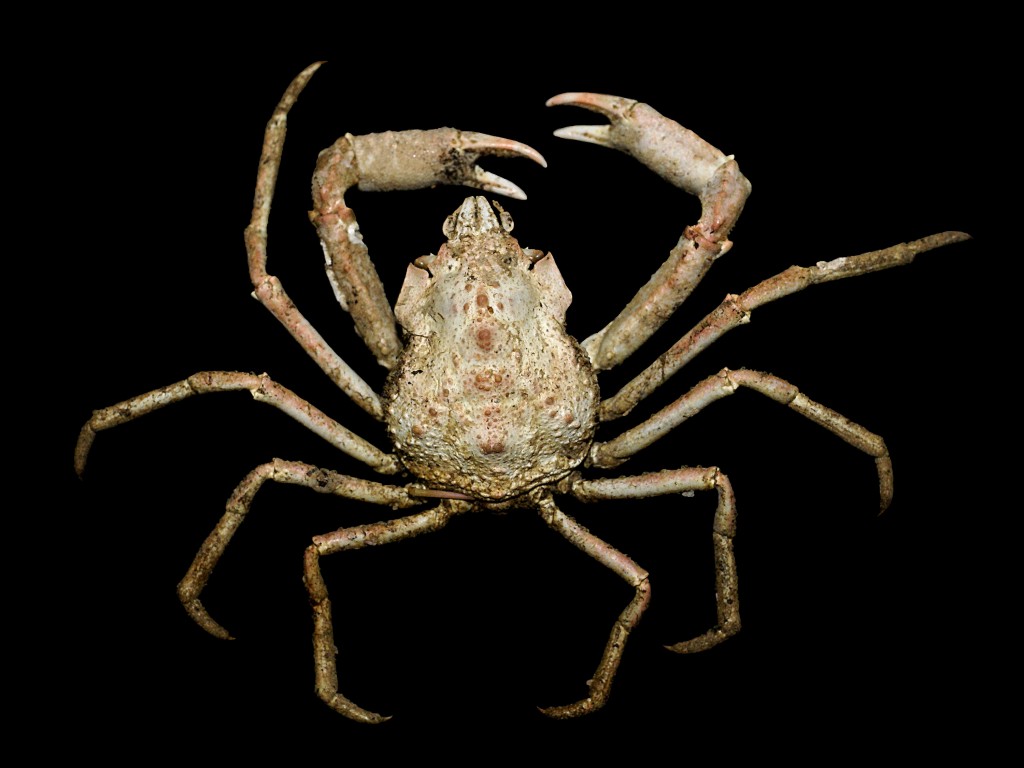 As to exactly how the crabs’ clothes work as a defense, that really depends on what it wears. Crabs that swathe themselves in sand, small rocks, and bits of kelp are usually going for basic camouflage. But many species also pick up other living animals- that is, sponges, bryozoans, algaes, and anemones- are usually trying to co-opt some chemical defense. All of these creatures can secrete noxious substances, and in the case of the anemone, deliver painful stings. You might think that these sessile organisms wouldn’t be very happy to be picked up and moved around, but it seems the benefits go both ways. The crab gets a potent predator deterrent, while the anemone, by virtue of being transported, is able to feed on diverse food items and gets better water flow through its tentacles, which helps with respiration. 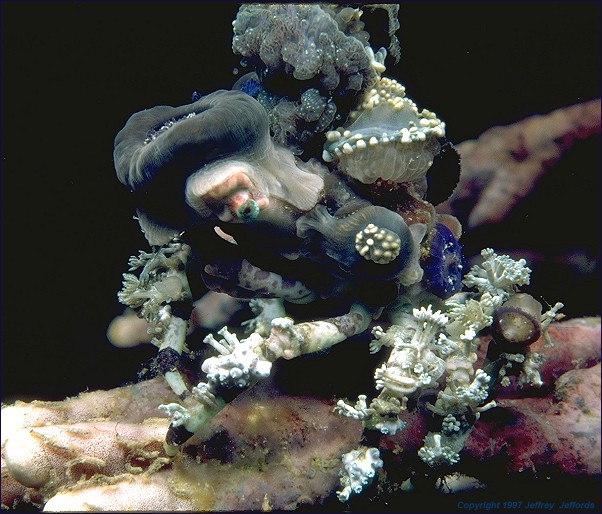 I promise you, there is a crab under there. (Image from divegallery.)

Aside from all that, the decorator crabs get an additional defense boost simply by appearing larger. Many of their predators can’t swallow prey over a certain size limit.

Camouflaging with live animals is fairly unusual outside of the seafloor, however, since most terrestrial animals tend to move around too much to be considered decorations. On the other hand, as many taxidermists know, corpses and castoffs make a fine addition to any collection. The larvae of several species of assassin bugs weave ‘backpacks’ out of the actual dead bodies of their victims- ants, in most cases. After paralyzing the hapless critters and sucking out their internal fluids, the assassin bug bundles up the ant’s remaining exoskeleton in sticky thread it secretes from its abdomen and sticks it there.

This is an effective antipredator defense, as shown in at least one study, because most predators don’t like messing with ants- they bite, sting, and have a nasty habit of ganging up on you and ripping you into bite-sized pieces. Seeing an amorphous cloud of ants trundling around is apt to make any spider run far in the opposite direction. If they do manage to strike up the courage to attack, they’re likely to grab onto a faceful of dessicated ants while the bug itself continues merrily on its murdery way. 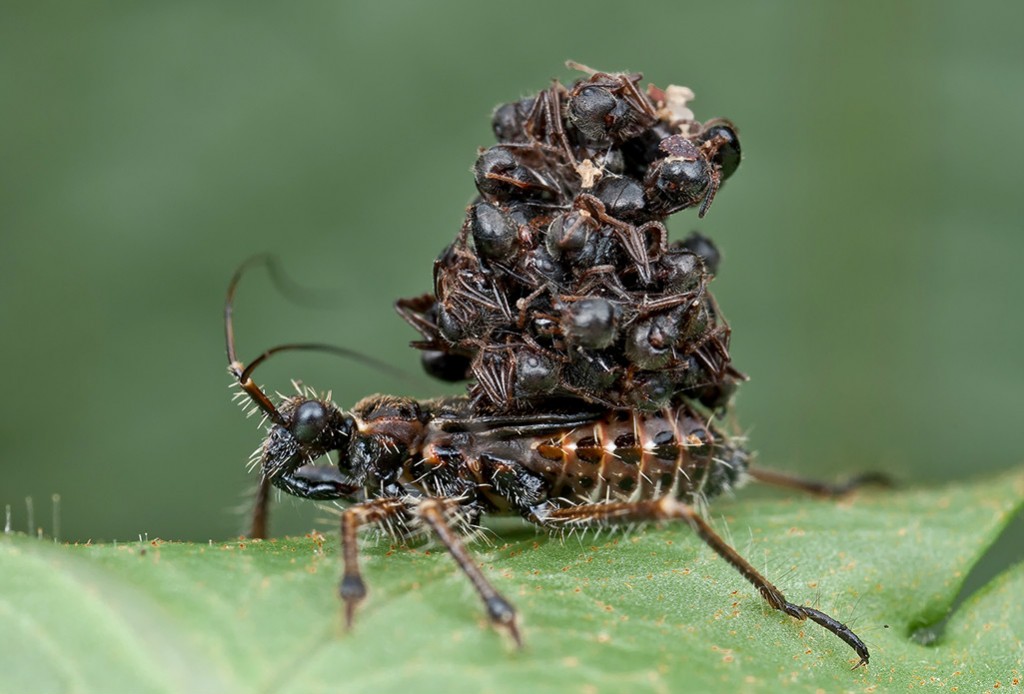 I can’t forget my backpack if I’m going to assassin bug school! (Photo by Getty Images.)

Invertebrates are not the only creatures to change their looks via the environment. Some bird species, like the rock ptarmigan, disguise their feathers with mud in order to blend in when the winter snow melts. Curiously, only males display this behavior, which suggests that bright white plumage is attractive to the ladies (who molt into darker colors as soon as the season turns). In fact, males that dirtied themselves usually did so immediately after their mate laid eggs; aka, ‘now that she’s pregnant I no longer have to put effort into looking good!’ Nice one, guys.

Pigs are another group of animals well-known for getting dirty, or wallowing, as it’s called. This is not to hide, however, but for the dual purpose of suffocating parasites and cooling off via evaporation. Wild boars also use mud for another surprising reason: to look sexy. Males do most of their wallowing in autumn, not a particularly hot or parasite-ridden season- but one that coincides with the mating rut. As to why wallowing coincides with sexytimes, the scientific jury’s still out. But they aren’t the only ungulate (hoofed animal) to do this. The bucks of many deer species have a lovely habit of urinating on the ground and then wallowing in it, coating themselves with manly-stinking mud. Sometimes they even forego the mud and put their heads down to urinate directly on their own faces. Aren’t deer majestic. 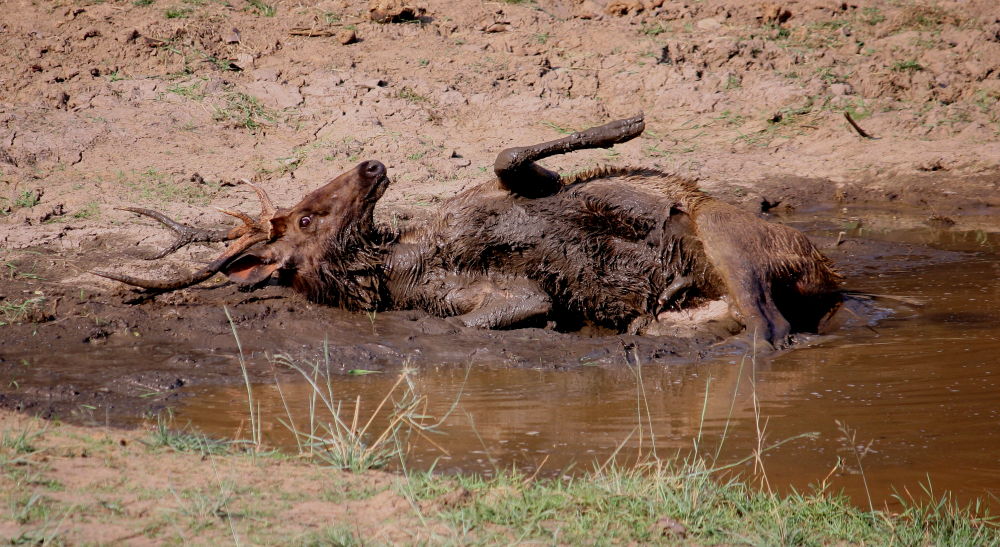 Ungulates in general are just obsessed with pee. (Photo from IndiaWilds.)

Bearded vultures (which also go by the name lammergeier) also have a habit of rolling in mud, but it isn’t to disguise themselves, or to get rid of parasites, or even to attract mates. Though many have seen and admired the elegant look of the bearded vulture, with its pinkish-to-rusty chest plumage, few realize that this lovely color is actually not naturally occurring: bearded vultures kept in strict captivity actually have white chests and heads. Wild vultures attain their looks by bathing in iron-enriched mud and soil. Higher-ranking birds within the vulture hierarchy tend to have darker red feathers. This has lead some researchers to believe that the mud is a status symbol like human makeup, indicating that the bird has the leisure of seeking out this specific mud and rolling in it for long periods of time. In fact, they can spend over an hour staining themselves, and prefer to do so without being watched.

You can’t strictly call bearded vulture mud-staining a cultural thing, of course, because even birds raised by humans in captivity will perform the behavior: this means it’s innate, and it has a good evolutionary backing behind it. But animals who dress themselves up purely for its own sake do exist- animals besides humans, I mean. A recent paper on some of our closest relatives found that arbitrary self-decorating ‘fads’ can be passed around in chimpanzee. The fad in question was sticking a piece of grass in their ear. 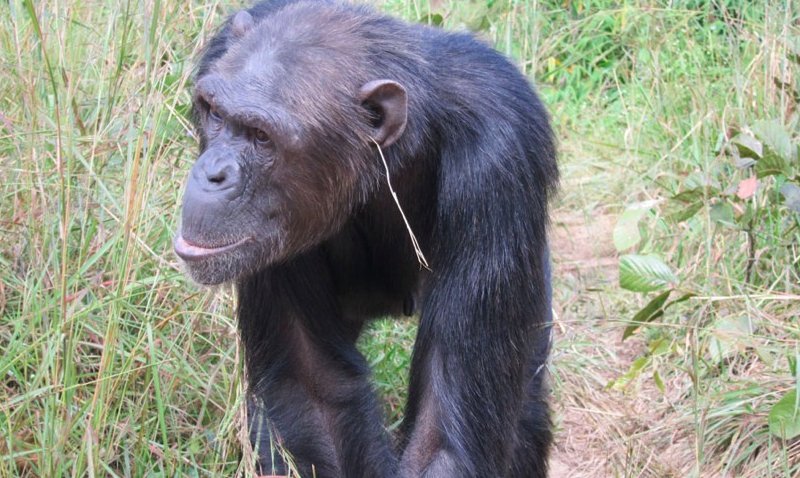 This fashion statement was started by a chimpanzee named Julie for mysterious reasons- maybe she had an itchy ear?- but was quickly picked up by other members of the group. And again: there’s no evidence that having a blade of grass sticking out of your ear confers any actual benefit! Other local groups of chimps didn’t do it. It was purely cultural.

Costuming without a direct defensive or sexual benefit is, of course, pretty rare in the animal kingdom. This is because there are very specific costs to dressing up. The biggest one, of course, is carrying around that added weight. Hermit crabs, for example, can move a whole lot faster if they aren’t carrying a shell (but nobody wants that, because they are actually gross and hideous creatures without them). 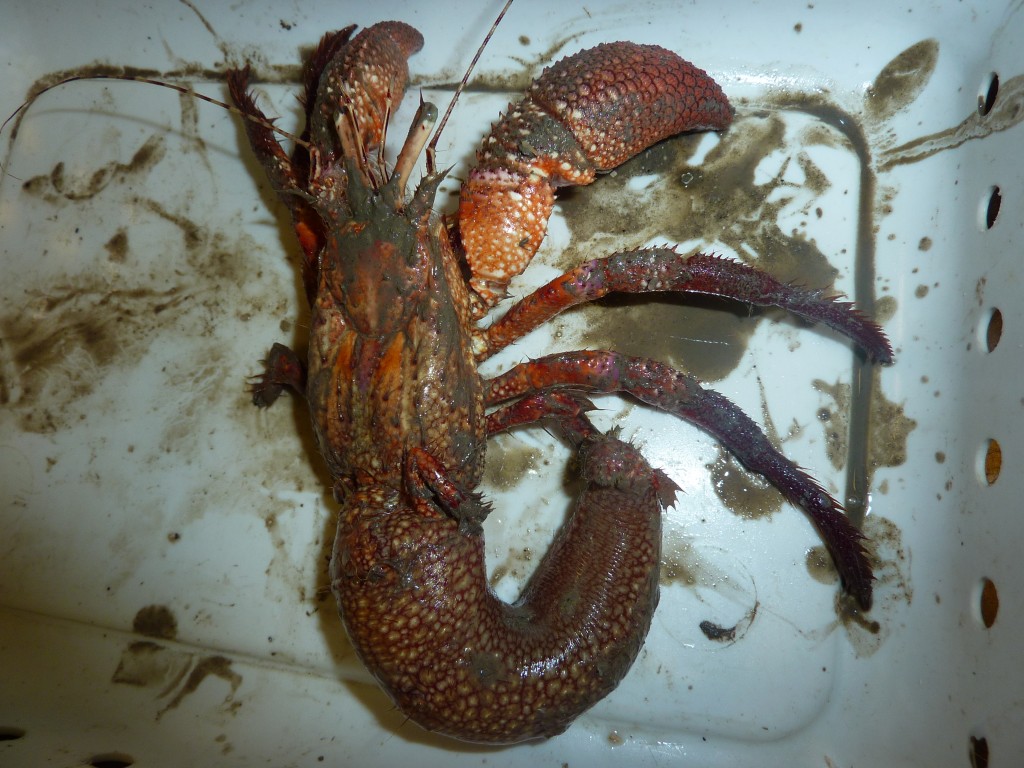 Likewise, many costumes take a lot of energy just to construct. Caddisfly larvae build very elaborate and time-consuming butt cases out of sand or twigs or whatever detritus is in their environment. If you are an asshole like certain scientists are, you can remove the case and watch them struggle to build the whole thing all over again. Larvae that have to build cases several times end up actually being smaller as adults because of all the effort they have to expend. 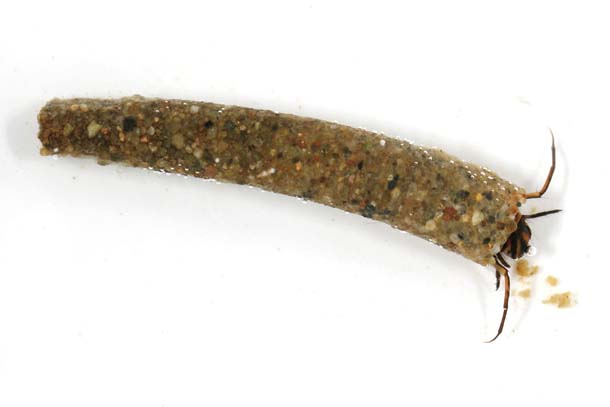 So that’s what animals wear! Hope this gave you a few costume ideas to scare the kids with!

Writer, ethology enthusiast, axolotl herder. Might possibly just be a Lasiurus cinereus that types with its thumbs.
View all posts by Koryos →
Tagged  animal behavior.
Bookmark the permalink.