We all know what natural selection is, right? Animals that have genetic traits that mean they live long enough to breed get to pass on those traits to their offspring, thereby creating a population with higher and higher percentages of those high-survival traits.

Sexual selection is the evolution of the selection of mates. And here’s where it gets really weird. And complicated. Because sometimes what animals find sexy is also what tends to get them killed. Like, check out this male widowbird. 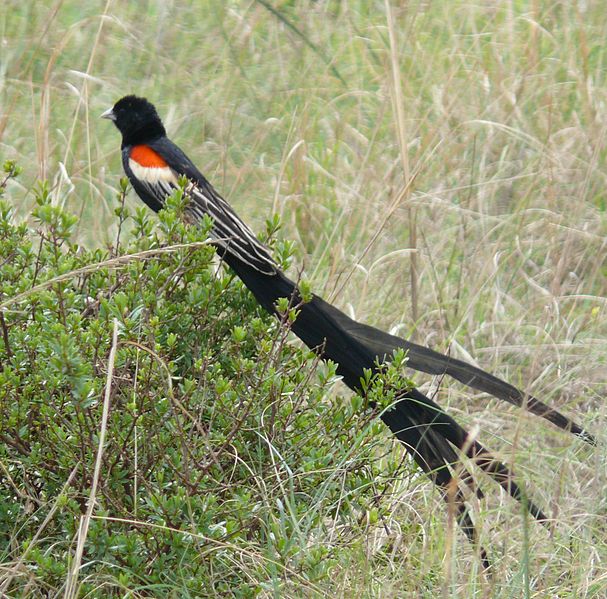 You may not have noticed, but this fellow has a rather long tail. This tail actually gets in the way of flying. Which is important, because birds that have trouble flying tend to be… you know… eaten. That makes it difficult to pass on your genes.

Here’s what the female widowbird looks like, by the way. 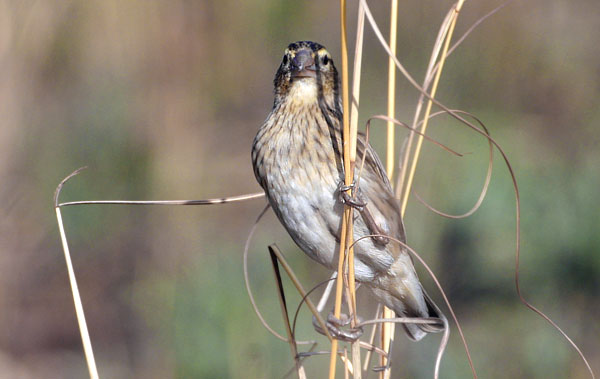 You may notice a few differences. Ok, so why does the male of the species look so photoshopped when the female doesn’t? You guys probably already know the answer: it’s because the female gets to be the one that chooses the mates in this species, and they choose males with unrealistic-expectation tails.

The real question is why. Why do the females get to do the choosing, why do they choose tails, why would ANYTHING evolve that lowers an animal’s chances of survival?

Well in this case, the females get to do the choosing for two reasons. The first is simple: when different gametes evolved, it became more logical for creatures with eggs to invest energy into raising their offspring to adulthood, because an egg is more costly to produce in the first place. Conversely creatures with sperm can waste it all over the place because it’s really easy to produce. So right off the bat egg and sperm producers have different agendas. Egg-producers want to guarantee the survival of the young they have, while sperm-producers want to put their sperm into as many places as they possibly can.

(This of course is something of an oversimplification, and there are plenty of cases where the difference is neutralized or reversed- see the northern jacana and the phalarope. Also important to note that differing gametes is like the first ever stupid sexual selection byproduct that decreases fitness- it would be MUCH easier to make more babies if everybody could mate with everybody- but once it evolved it obviously couldn’t be taken back. I shake my fist at the first asshole who thought heterogametes were a hot idea.)

Ok but going back to widowbirds, the second reason females get to be the choosy sex is not only because they’re in it for the long haul over the dick-dipping but that most birds don’t have dicks. They mate via a cloacal kiss, which requires the complete cooperation of the female. So the male had better get her to like him or else he’s Jim’d.

Females are choosy in a lot of other groups of animals besides birds, of course, but birds are the most egregious about it.

Okay ANYWAY. On to those other questions. Why do males evolve long tails in the first place?

There’s a fairly famous experiment with widowbirds in which researchers cut off parts of the tails of some males and pasted them onto others. They found that not only did the females ignore the males with shortened tails, they were way more likely to mate with the males with artificially enhanced tails than those with regular tails! So females don’t just like long tails, they like long tails that DON’T EVEN EXIST. We can see right away that this creates a selection pressure on the male sex to keep evolving longer tails. The longest tail gets the girl. In this case long tails are what’s known as a supernormal stimulus because the attractiveness of it increases outside of what exists in reality.

So right there you realize that this is selection that not only has nothing to do with how well a male survives but that actively decreases his chances. And yet there’s no way to go back to having normal tails, because the females won’t even look at a dude with a shorter tail. The species really screwed itself over.

Now, there are two theories behind why this sort of exponential expansion of a ridiculous trait occurs. The first is Fisherian runaway selection theory. This theory suggests that the species starts out with a male and female that look exactly the same. Ok. But some females have a secret burning desire to touch their cloaca to a male with a really long tail. Then along comes a male who happens to luck out on having a longer tail than normal! The ladies ravish him. He has lots of babies- not only males with longer tails, but females carrying that genetic desire to kiss cloacas with long tailed-males. Soon the process gets ridiculous. Males have longer and longer tails. Females want longer and longer tails. The tail-shaking and sex-having is out of control. Hence, ‘runaway selection.’

Evidence for this theory was shown in another long tail-loving species, the green swordtail fish. Here’s what that dimorphism looks like:

The elongated lower fin or ‘sword’ is a sexually selected trait, and some closely related species to this fish don’t have it. However, when researchers tested them, they found that females in species without swords still preferred males with swords. So if a male in that species happens to be born with a sword, watch the HECK out.

(I should add a note saying that this is the textbook example a lot of classes use to describe Fisherian runaway selection, but a paper JUST came outsuggesting that long tails might in fact be an ancestral trait to the entire genus that’s been lost in many species. Time will tell, but that’s a pretty heavy blow to the evidence.)

Now, the OTHER theory besides Fisherian runaway selection to explain these wildly out of control sexual traits is chase-away selection. (Finally! We got to it!)

Chase-away selection basically takes the opposite tack to runaway selection. It’s not that females are primed to want long tails. It’s that they end up wantinglonger tails. In other words, they’re continually evolving a resistance to being attracted to long tails. So the males have to keep coming out with LONGER tails in order to get their attention.

Why would females keep evolving a lack of attraction to shorter tail lengths? Well, because the males are eploiting a sensory bias in the first place, and that’s cheating. Even though a female might be attracted to a long tail, it doesn’t mean the males with long tails are always the best choices for mates. Especially if every male in the population now has a long tail. The female wants her offspring to live long enough to breed, too! So the female evolves a higher ‘threshold,’ i.e. a longer tail length before she’s attracted to it.

It also implies that traits like long tails DO have a function, whether that be a sign that the male has better genes (the good genes theory) that allow him to survive even with a cumbersome tail (the handicap hypothesis), or that he has a better ability to resist parasites or disease (the bright male hypothesis), or that he might produce sons that also have a good chance of mating (the sexy son hypothesis).

Not all of these hypotheses have a good amount of evidence, and indeed both runaway and chase-away selection have both their supporters and detractors in the scientific community. Basically, it’s all very complicated and often difficult to prove. And people keep coming out with more hypotheses. And it is just a sexy, sexy mess out there. And I had better stop before I write an entire textbook on it.