“How can you know things about her that we don’t?” Kutta said, almost jealously. “She never talked about herself…”

“She did to me,” said Sacha. “When I was the only one. She never shut up, back then. She was still out of her mind.”

“Out of her mind?” Kutta repeated, but Mhumhi thought he understood.

“The half-breed cull,” said Sacha. “It was a domestic thing. Before we were born. They were very concerned. Domestics can interbreed with a whole lot of the big dogs, you know, even though they don’t do it now. The wolves… the coyotes… the jackals, too.” Sacha paused to snort. “That golden jackal- I don’t doubt she knew some half-jackals.”

“Wait,” Mhumhi said. “Half-breed cull- you don’t mean to say that- that they killed…?”

Sacha looked at him. “Finish your thought, Mhumhi. Yes, there was a big group of domestics that decided to get rid of anybody who wasn’t pure-blooded. It was done in two or three days, I think. They marked all the homes beforehand and then came in all at once in a gang and killed them.”

“But why would they do that?” exclaimed Kutta.

“I don’t know,” said Sacha, glaring briefly at the ground. “Domestics have always had strange thoughts… when more than two of them get together they can come up with peculiar ideas… I think they were frightened that they’d be bred out, that’s all. There were a lot of hybrids… they did very well. Maybe in a few generations there would’ve been no domestics left. And then who would’ve looked after their precious hulkers?”

“That’s awful,” said Kutta, “really awful- how could anybody have let that happen? How could it have gotten by the police?”

“That’s a question a lot have dogs have asked themselves,” said Sacha. “Mother always said that the domestics must have made a deal with the police. They must have worked with other ordinary dogs, too- a lot of those hybrids were no joke, in terms of size and strength, and there’ve never been terribly many pure-blooded domestics to begin with. I think they had grey wolves helping them.”

Mhumhi thought of those great grey forms bursting in their home, yellow eyes flashing up the stairs, the way the teeth at his flank had felt- He shuddered.

“So what that means is,” said Kutta, slowly, “what it means is- Mother’s puppies were half-breeds.”

“Yes,” said Sacha. “I don’t even know what they were half of. But someone tipped off the gang, and Mother’s house was marked. She didn’t know what the mark meant, even. No one did who wasn’t in on the scheme. But they came in the next morning and killed all her puppies right there.”

Neither Kutta and Mhumhi said anything, and Sacha went on.

“She told me,” she said, and Mhumhi thought he saw a strange flicker in her small eyes for a moment,  “that she went a little mad then, and she went out and looked for them, because she didn’t believe it. Stepped right over their bodies, went outside, around and around, street by street, calling for them. Came across a den of bush dogs. Saw the puppies. Started to take them.” 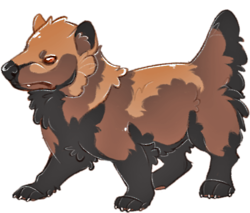 “Then that was where she found you,” said Mhumhi, and Sacha’s eyes flashed brighter.

“She stole me, you mean. Yes. The adult bush dogs were attacking her. She fled with one. I don’t remember being stolen, but she told me.” Sacha gave a sharp laugh. “When I asked her why I didn’t grow anymore. She told me. She was proud of it! She was mad, our mother, d’you realize that?”

“She told me she came to her senses, but she decided she’d have a puppy for each one she’d lost. That’s what she said to me. As if it would make everything right. She came back with you, Kutta,” Sacha said, suddenly looking hard at Kutta. “That’s when she stopped speaking to me. She was done with me, you see. I’d served my purpose. I’d been a puppy, I’d suckled for her, loved her like a mother, and that was all she cared for.”

“What happened when she came back with Mhumhi?” asked Sacha, and Kutta fell silent.

Mhumhi tucked his tail, for he, too, remembered a certain indifference in his mother’s behavior after she had returned with Kebero one day.

“You talk as if love is a nice thing,” said Sacha.

“Yes,” said Sacha. “What d’you think those wolves were feeling, then, when they saw our mother with their puppy in her mouth? For what feeling do you think they murdered her?”

“You’re twisting it all around,” Kutta gasped.

“No. You don’t understand it… it isn’t nice. It’s beautiful and terrible, but it isn’t… nice.” Sacha furrowed her brow, brooding. “I’ve lost the thread of what I was trying to say, anyway.”

“I don’t see how there’s anything else left,” said Mhumhi. He was feeling weary. Sacha was right, her words hadn’t helped. His image of his mother was now murky, fouled. For what reason had he been taken? To serve a purpose? She had always whispered… she had always whispered in his ear that she hadfound him, chosen him specially. That he was her beloved. That she was his mother.

He had not thought of it before, but had there been another mother, one who had loved him before?

“Mhumhi,” said Sacha- she was looking at him, coming over to him with her ears back. “Don’t think about her.”

Which her, thought Mhumhi, was she referring to- He stopped thinking, then. Sacha had pressed herself up against his front legs. He leaned down to lick at her muzzle and cheeks.

“I don’t believe it…” Kutta said. “I don’t believe how any of it… could have happened… how could we never have heard about any of that? The half-breed cull? How could it have just… gone quiet?”

She looked at Mhumhi and Sacha pressing against one another, a bit of desperation in her gaze.

“If that was really true about Mother- if she was just picking out one after the other- what about those two in the sewers, Mhumhi? Why did she start looking after them?”

“In the sewers!” exclaimed Sacha, jumping away from Mhumhi. “I knew it, I knew that’s what you two were hiding- she did steal more puppies, didn’t she? And you’ve been looking after them and keeping them secret!”

“Well, what about them?” said Sacha. “I tell you, it’s a wonder we’ve even been able to feed Kebero- I don’t know what you two were thinking, trying to look after two more- but you’ll have to take me to meet them, and then we can take them home.”

“I can’t believe you’d just let them stay down there in that muck! It’s so cold- they must be getting sick-”

Sacha paused for a long moment.

“Just… baby hulkers,” said Sacha. “In the sewers. And you’ve been talking care of them.”

“They’re not really babies anymore, but yes,” said Kutta. “They really don’t eat as much as you might think.”

“And how many did you say there were?”

Sacha let out a long, slow sigh through her nose.

“Hulker puppies,” she said, again. “Well, you can’t fault our mother for her choice of a parting gift.”

Kutta winced, but Mhumhi had to stifle a laugh.

“Will you meet them, Sacha?”

“I don’t see that I have any choice,” said Sacha. “I’m assuming they’re tame?”

“Oh, he is when he isn’t sick,” said Kutta, in an exasperated way. “Yes, Sacha, they’re very tame, and they can be very sweet- you should have seen the little girl and Mhumhi the other day-”

“All right, we don’t have to get into the details,” Mhumhi said loudly. Kutta shot him a wicked look.

“I’ll look at the little things today, then, I suppose,” said Sacha, rising to her feet. “After we get our meat. Though I don’t know what we’ll do with them in the long run… They’ll make things quite dangerous for us, you know.”

Sacha snorted. “It is, in fact, their fault. If they were puppies, we could move them to the house, but I won’t risk having hulkers around, even if they are tame.”

“Oh,” said Mhumhi, “you should tell her your plan, Kutta, about what you want to do with them.”

Kutta gave him a look that was both annoyed and alarmed, but Sacha had turned her gaze expectantly upon her. She coughed.

“Well- I was only thinking- since we’re having such a hard time taking care of them, we could find an adult hulker, and- and pass them on.”

“I think that’s an excellent idea,” said Sacha at once. Mhumhi stared at her in surprise, but Kutta’s furry ears pricked.

Mhumhi’s tail was quivering with suppressed laughter at the look the two of them exchanged after this.

“Anyway,” said Sacha, “I know exactly where we can put them.”

“You do?” Kutta took an eager step forward, her tail swishing lightly. “You know where a hulker lives?”

“Don’t broadcast it,” said Sacha, casting a furtive glance at the entrance to the alley. “Yes, I do. The foxes weren’t the only things I was investigating while you two were off chasing wolves and adopting hulkers. I followed that domestic we saw the other day.”

“The one with blue eyes?” said Mhumhi, and Sacha grunted in agreement.’

“The pale-eyed one, yes. I followed him all the way to where he dens. You’d be surprised.”

“But did you see a hulker?” Kutta asked, impatient. “You know not every domestic has one around…”

“No, but I’m quite certain that’s who he’s been bringing the meat to. His sister, no doubt.” Sacha gave another grunt. “I suppose Mother wanted you to call those two little things in the sewer our brother and sister, too.”

“Anyway, we should go get out meat, it’s almost time,” said Sacha, wagging her tail slightly. “I can show you were they live on the way.”

“Yes,” said Sacha. “We pass it every day. Stupidly obvious. It’s in that squat brick building- what did Mother call it-” She furrowed her brow a moment. “The school.”

Writer, ethology enthusiast, axolotl herder. Might possibly just be a Lasiurus cinereus that types with its thumbs.
View all posts by Koryos →
Tagged  darkeye.
Bookmark the permalink.